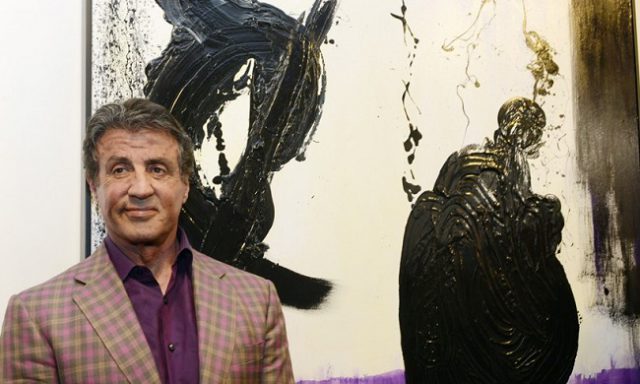 It’s not often you get invited to have dinner with a Hollywood screen legend, and then top the evening off with him late at night at the famed Hotel du Cap in the South of France. Sylvester Stallone is one of those amazing individuals, who despite his enormous wealth and fame, still enjoys sharing his true passion of painting. Up close and personal, he is an entertaining and engaging man filled with spirit and a love for the art.

I was fortunate to join French dignitaries, royalty and wealthy European art lovers as Stallone hosted an intimate crowd to his private dinner at the Villa Massena, a spectacular Italianate neo classical villa from 1898. Earlier that day, Stallone opened his retrospective of paintings at the Galerie Contemporaine du Musée de Nice. Titled “Real Love: Paintings 1975-2015,” the exhibition spans four decades of the film star’s painting practice from his earliest figurative works to his most recent large abstract canvases.

Although Stallone is best known for famed roles in “Rocky” and “Rambo”, his first “real” love is painting. Since childhood he has identified his true calling as a visual artist and has even stated that if offered the choice, he would spend his life painting instead of starring in action movies.

“There is a public face and a private face,” Stallone said, “and I feel the same way about art. It’s a collage of emotions. And when you can transfer that onto the canvas, it’s an amazing feeling,”

In his early works, Stallone deals with issues of fame and celebrity, exploring the area between the public and the private as seen in his earliest painting displayed, entitled “Finding Rocky” (1975), which precedes the script and release of the film “Rocky”. For his latest works, which were exhibited for the first time in Nice, he combines “organic and geometric shapes in this robust black, white, and red palette” to create works “that further demonstrate his dialogue with modern painting,” according to Galerie Gmurzynska, the Zürich-based commercial gallery that exhibits his work.

Over the years Stallone has developed a highly individual style that comprises a bold use of paint and color. His works are distinguished by symbolic tropes such as the recurring clock and prominent features in form of his specially fabricated frames that abruptly cut off halfway through the canvas, emphasizing the open-endedness and evolution of the themes the artist seeks to literally frame, while these details become integral to the works in the manner of Baroque painting.

Always eager to explore and probe formative artistic styles from avant-garde to abstract expressionism, beginning in the 2000’s Stallone’s paintings veer towards a more reduced palette of black, white and his favorite color, a sanguine and visceral red, in potent abstract paintings, transposing his profoundly physical screen characters to the creative act of painting, with the canvases registering the vigor of the artist’s handling of the medium.

In his recent works Stallone combines organic and geometric shapes in this robust black, white and red palette that further demonstrate his dialogue with modern painting. Taken together, the works assembled for “Real Love”, offer an exclusive and first deeper insight into Stallone’s powerful art over almost half a century.